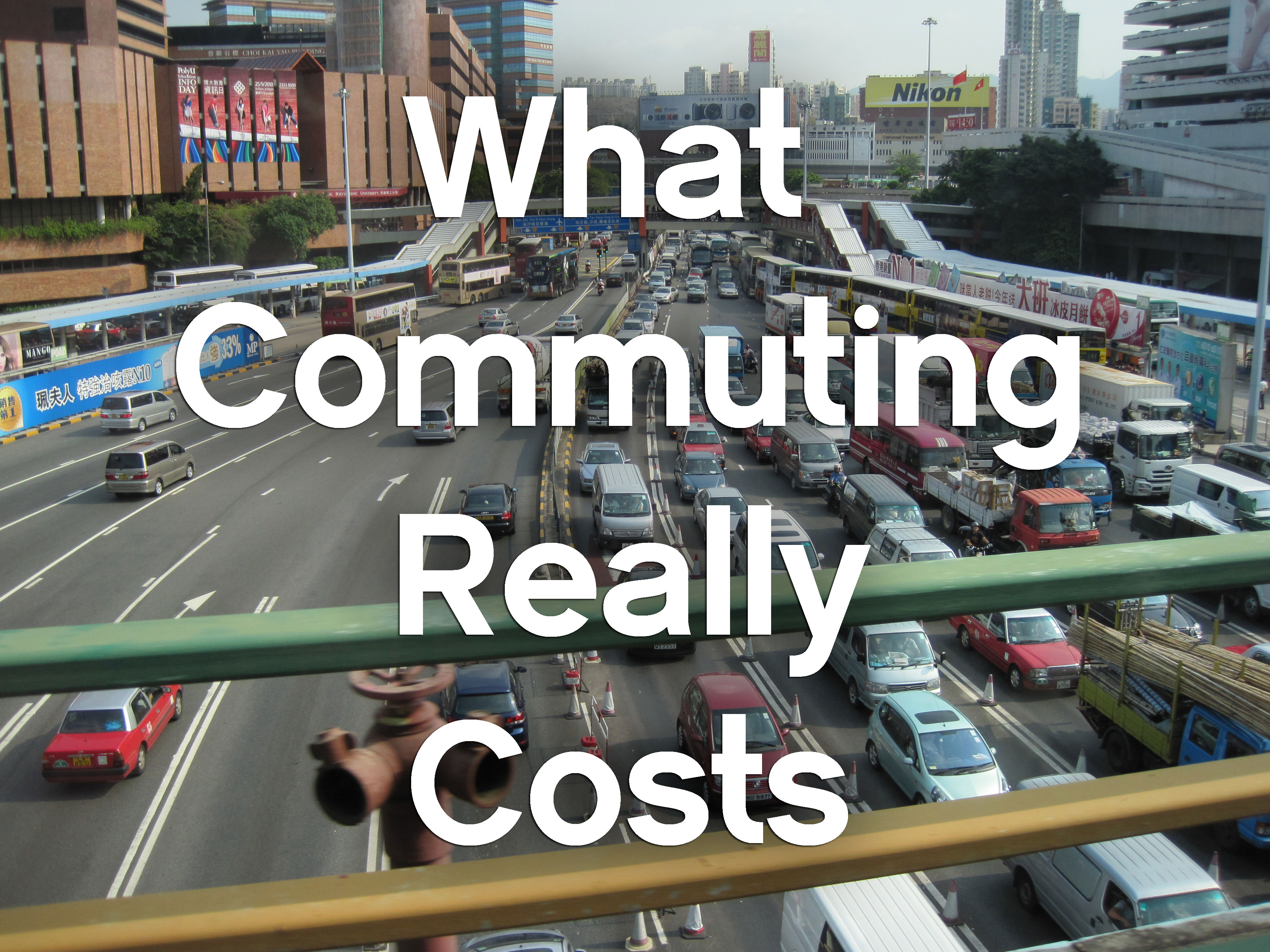 It’s hot, you have just listened to the same mortgage lender’s advertisement for the sixth time, and every lane except for yours seems to be moving just fine. At some point during your weekly commute, there is that inevitable moment when your hands crash onto the wheel, your head cascades back to the headrest, and you utter those famous words: Never Again!

In spite of all the hassle that comes with moving, more people are recognizing how much value there is by relocating closer to their office, or to the places they spend most of their leisure time. While the value mentioned here does take into consideration the financial benefits of a walkable commute, eliminating the need for excessive gas or transportation costs, the real payoff is realized as free time, a commodity more precious than any measurable currency. Have a look at the “true cost of commuting” info-graph below to see how much you can save by taking a shorter route when you choose location over a larger space.

Time is invaluable, and those hours that we can call our own are often eaten up by commitment, and more dramatically, transportation! With that in mind, it’s no surprise that many commuters are choosing to sacrifice space for location and convenience by moving closer to the downtown core. It doesn’t end there either! In this business you have the opportunity to meet a lot of people, and through those encounters you hear many stories. In addition to a populous representing my own generation, I have spoken with many couples who have explained how they are no longer interested in maintaining a yard, nor have they got the inclination to put up with all the hassles of owning a detached property. For many, it’s more convenient to pay strata fees than it is shelling out for property tax. Enter the condo scene. 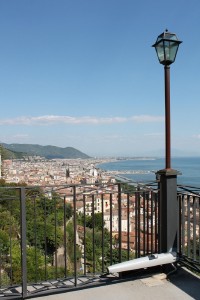 There are plenty of benefits to living at the heart of a city, elevated far above the hustle and bustle of crowded streets. Start with a reduced carbon footprint! Truth be told, the future of sustainable cities is looking up rather than out. The more we situate ourselves in central areas, the more our peripheries are able to flourish, and by moving closer to our daily and nightly workplaces and haunts, we significantly lighten the load placed upon our local environment. When living at the heart of a city, we drive less, walk more, and pour resources into local businesses rather than striking out to those big box stores on the periphery every Sunday. Ironically, by moving into more densely populated areas, we are becoming more neighborhood oriented individuals and a lot more social in the process.

It can’t be stressed enough how much of a pleasure it is to know that at the end of your workday you are just a short distance from home. Having lived in one of the most densely populated cities on the planet, I can sympathize with anyone who feels that they are throwing away their lives in heaps of weekly commute time. I was enduring an hour and a half each way just to combat traffic while on my way to and from work while living in Istanbul! It is for this very reason that people are willing to compromise on smaller living spaces in order to be that much closer to work and to the social activities that help them unwind. Decision like this open up as much as ten to twelve hours of additional free time in a workweek! What would you buy yourself with a dozen extra hours every five or six days? More sleep? Guitar lessons? Extra time with people that really matter? It’s not really important what you choose, what matters is that those of us who have opted to emigrate into the city center now have the luxury to decide for ourselves, rather than endure the obligation to travel. 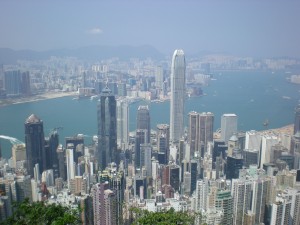 Take a look at some of the most iconic cities in the world: London, Hong Kong, New York, Paris, and San Francisco. Despite astronomical housing prices and cramped studio floor space, people continue to flock towards these cities in order to be a part of the vibrancy and excitement that can be found in the streets of such cultural microcosms. Simply put, they are exciting places to call home! There is an abundance of great restaurants, fun bars, galleries, markets and regardless of the time of year, it always seems like something is going on. With so much to do, many people are spending more time out than they are at home. Because of this, stylish neighborhoods are beginning to spring up to accommodate the needs of new residents flocking to central neighborhoods.

So how are people coping? Well, to be honest, just fine actually! The dream that has been burned into our brains since we were little has always been to expand outwards; to have the yard, to have t 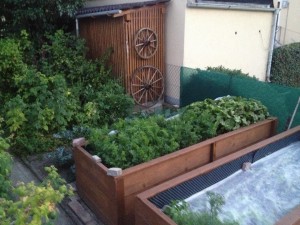 he white picket fence, and to have the two car garage, not to mention the thirty year mortgage. City planners are becoming more aware of the need to make public spaces accommodating and family friendly. Green areas are not just anticipated, but expected, and community facilities that allow for recreation and neighbourhood involvement are more common than they have ever been. What it is coming down to is the reality that you are more likely to develop a relationship with someone living on your block downtown than you ever would living out in the suburbs. Community gardens are opening up the opportunity for people to get their hands dirty on the weekends and seasonal festivals are letting residents branch out socially. Simply put, cities are doing their utmost to make residents feel at home in their new urban surroundings.

The Urban/Suburban debate has raged on for a long time, (http://www.hgtv.ca/urbansuburban/article/where-to-live-choosing-between-urban-and-suburban/) technology and design alternatives coming available however are making choices to relocate downtown more of a no brainer. While none of us want to live in a shoebox, there are many out there giving a nod or two towards innovations that have allowed people to relocate comfortably to a more urban setting, while maintaining many, if not all, of the luxuries they may have been used to outside of the city’s core. At the end of the day, it’s difficult to ignore the numbers when looking at all those opting to relocate downtown. And it’s hard to deny the benefits of having everything close at hand without being reliant on a car. While there will always be the stalwart individuals determined to maintain their suburban square footage, a dramatic number of people are instead looking towards innovative furnishing, and interior design alternatives that will allow them to stretch out and relax twenty or thirty floors above street level while their friends and colleagues are busy playing road warrior.

Showing our unique furniture at the BC Home and Garden Show 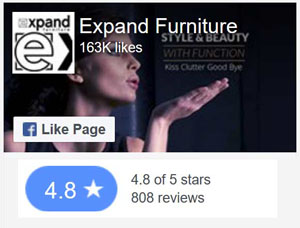 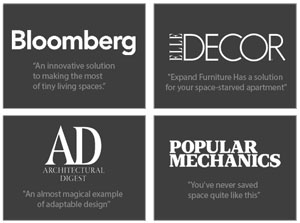 Space Expanding Furniture. Utilize your area and make it better. At Expand Furniture we provide incredible furniture from smarter wall beds that fold over sofas and desks, to convertible coffee to dining tables. Live better by Living Smarter and Expand Your Space.

USA/International: Prices are displayed and processed in the USD.

WE ARE OPEN ONLINE